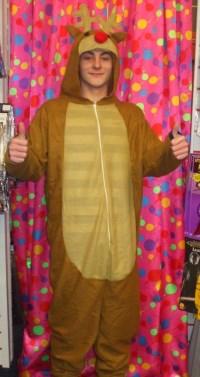 Want to snuggle up and be nice and cosy this Christmas?  Then go for our new range of Christmas Onsies we have had arrive this year.

To start with we have the main fella himself-Father Christmas, looking rather jolly in bright red with soft fluffy white trim to distinguish his jacket and around the hood.  Not forgetting the pom pom on the end of his hat.  Finish of the look with Santa’s Bell, and his recognisable beard and glasses.

Next up we have Santa’s little helpers the friendly Elves.  With bright red bottoms and a green top.  Complete with a jester style hood.  Plus an elf would not be an elf without his bells, festooned around the bottom of the jacket and the end of his hat.  Team up this costume with a pair elf shoes and a pair of elf ears.

Last but very much not least, the famous reindeer of all-Rudolf.  Complete with antlers.  Not forgetting what he is famous for-his very large red nose.

Get the kids dressed up the same as you, with Santa, Elf and Rudolf.  There is also an extra one for the kiddie winkles the Snowman, complete with carrot nose, felt buttons for his mouth and eyes.  He even has a very festive scarf.