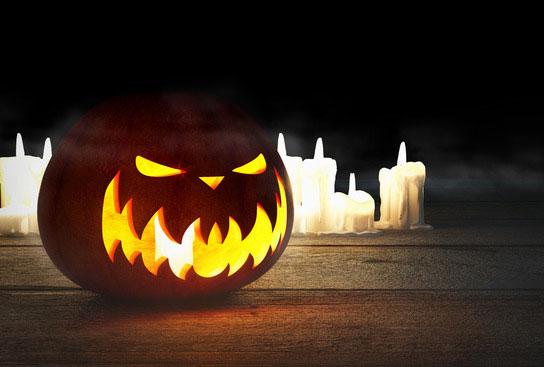 “When black cats prowl and pumpkins gleam, May luck be yours on Halloween.”

Halloween has a rich past, filled with lore and tradition. Yet today it is very different from the festival it once was; ‘Samhain’, a Celtic celebration which marked the end of summer. Pagans once believed that the veil between this world and the next was thinnest on Samhain, allowing the dead to walk the earth once more. It is this lore that has captured our imaginations and influenced many celebrations and superstitions we have today. So without further ado, here are our 7 spooky facts you may never have knew about Halloween; just make sure you read this with the lights on!

We’ve all carved a smiley or scary face into a pumpkin or turnip to make a Halloween lantern at one time and another and it’s one of the most fun Halloween traditions. But where does it originate from? The idea behind pumpkin carving actually comes from an Irish legend about a man called Jack. The devil came to take Jack’s soul, but was tricked. When he died, Jack tried to enter heaven, but he was turned away because of his sins. He was then turned away from hell, and, complaining he couldn’t see, Jack was thrown a glowing ember by the devil. He used a turnip in his pocket to fashion a lantern and became known as ‘Jack O’Lantern’, aimlessly wandering the earth. Jack’s story is actually based on the phenomenon of swamp gases, which interact with decaying leaves and other matter to give off a spooky light. People once believed these lights were trapped souls.

Halloween gives us all the opportunity to dress up as whatever we like, whether that’s Freddy Krueger or your favourite superhero; most people love the excuse to dress up! But where does the tradition of Halloween costumes actually originate from? This actually dates back to Samhain, when the Celts donned costumes to blend in with the evil spirits walking the earth. Men from villages would often wear masks to lure evil spirits away from celebratory feasts at their village.

Most of us have been trick-or-treating as children and it remains one of the best parts of Halloween. Yet nobody is quite sure where the idea for trick-or-treating originated. Back when Samhain was celebrated, Irish widows and orphans would often go door to door to beg for food and supplies to get them through the cold winters. In the UK, children once went around the neighbourhood on the 5th of November (Guy Fawkes Day) asking for ‘a penny for the guy.’ Many believe the phrase ‘trick-or-treat’ originated in the early 20th-century in America. In a bid to combat mischief and pranks, people would offer treats to children as a bribe.

#4. A celebration of evil

Halloween is commonly considered as a celebration of evil, with many Christians disturbed by some of the imagery present on October 31st. It makes sense really – if the devil is the enemy, why dress up as him? However, those who consider Halloween to be a celebration of evil are clearly unaware of its history. All Hallows Eve was once a way for Christians to fight the devil – they believed the best way to do this was to attack his greatest weakness, his pride, which led to his fall from heaven. It is for this reason that the devil is often depicted with a tail and red horns – to mock him and cause him to flee.

#5. Razor blades in your candy?

One of the best parts of trick-or-treating on Halloween is arriving home with a bag of candy and treats, yet the urban legends of razor blades or poison in candy have been circulating for years. One such legend tells the story of Timothy O-Brien, who ate a pixie stick laced with cyanide after trick-or-treating with his dad. However, it later came to light that Timothy’s dad had poisoned his son in order to claim his life insurance policy. There is no real evidence of anyone trying to poison trick-or-treaters on Halloween, but parents should be aware that more road accidents occur on Halloween than on any other night of the year. The combination of drunk drivers on the road and children running around in costumes causes plenty of potential for accidents to take place.

Dia de Muertos, or ‘Day of the Dead’ is a Mexican celebration that many people think is the same as Halloween. It’s easy to see why people think this, due to the spooky costumes and skeleton face paint traditionally worn on the day. But the Day of the Dead is a festival which embraces and celebrates death. It’s on this day that the spirits of those we love can return to earth; families set up shrines filled with incense and marigolds to guide their loved ones home. Many families head to the cemeteries at the end of the day to spend the night with loved ones before they return to the other world.

However you celebrate Halloween, there are sure to be some facts in this article you never knew about and it’s important to know the origin of one of the year’s most popular holidays.