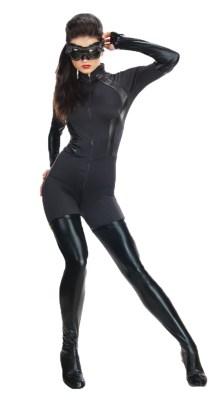 One our newest editions to the Batman range will leave your friends and family hiding their pearls as Catwoman has made a great appearance in Hollywood fancy dress stores. The Dark Knight Rises has become one of the biggest film spectaculars of the year and Hollywood Fancy Dress Staff were blown away, especially Anne Hathaway’s incredible performance as Catwoman.

We are super excited about the Catwoman costume as it has an incredible cat suit with attached bootlegs that will allow you to run in to the night inclusive with belt, gloves, headpiece and eye mask. This costume is an amazing edition to our store and will allow you to look and feel svelte whether at a party or with family and friends.

To make sure you are the darkness of the night, pop in to your local Hollywood Fancy dress store before they get snatched up! The real Catwoman wouldn’t let anyone do that now, would she?