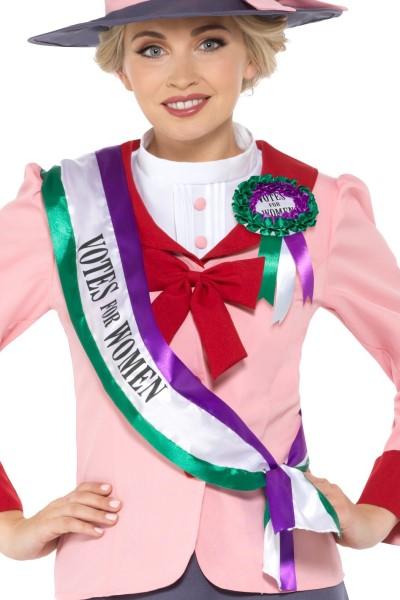 It's time to embrace girl power and remember the incredible efforts the Suffragettes made for the right to vote. Although voting seems like an ordinary aspect of life to us now, woman throughout history have fought tirelessly for this basic right.

The Women's Social and Political Union - the Suffragettes. Was formed in 1903 and led by Emmeline Pankhurst. Although this group was also middle class, it heckled politicians, held marches, members chained themselves to railings, attacked policemen, broke windows, slashed paintings, set fire to buildings, threw bombs and went on hunger strike when they were sent to prison.

The most famous women's rights movement were the Suffragettes. A group of women that protested for equality between men and women in the early 20th century. The most famous member was Emily Davison. In 1913, at a crowded horse race, she ran out into the path of oncoming horses in her protest for equality. You can celebrate her courageous acts along with the other Suffragettes with our Deluxe Victorian Suffragette Costume!

This beautiful costume is also available for children, for all those young feminists that are still fighting for equality. This costume includes the shirt and dress, with a Victorian style hat and life like 'Votes for Women' sash.

New in as well! The Victorian Suffragette Kit which fits both adults and children. The neat little kit includes a Sash with a matching Rosette. Grab it while you can as these are sure to sell out fast!