Defending the fancy dress industry from these supermarket giants 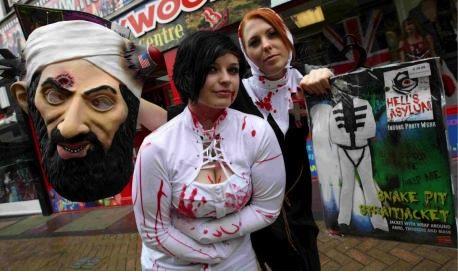 Below is the Echo story that ran today as we are furious that the supermarkets have now jumped onto our industry !!

A fancy dress store has defended its controversial Halloween outfits after two supermarket chains withdrew theirs from sale.

On Wednesday Asda removed its “mental patient fancy dress costume” and Tesco its “psycho ward costume” after the retail giants faced widespread criticism on Twitter, and from mental health charities.

However store manager Ursula Vick said they were just a bit of fun.

“It is certainly not our intention to stigmatise people with mental health problems, and I know people in that position,” she said.

“They think the costumes are just a bit of fun, and we have never had any complaints.

“We have been selling them for years, they are all based on characters from horror films and that sort of thing, where the companies that make them can’t use the actual branded names.

“They are the kind of thing people like to wear at Halloween.”

Owner Archie Brown added: “I think it is just being stirred up, and it is good publicity for the supermarkets, they like to muscle in on small traders and Halloween is getting very big.

“If the costumes really were that offensive they wouldn’t be made, and people wouldn’t buy them. Sometimes a costume does go too far, like the old Jimmy Saville costume, we took that off the shelves immediately.”

However staff at Bournemouth’s Cherry Tree Nursery, a gardening project for people with mental health issues, said they were outraged.

One mental health worker, who spoke anonymously to the Daily Echo, said: “People with mental illnesses are very vulnerable to this kind of impression, and they are still widely stigmatised.

“Too often someone comes here very distressed because of something someone has said.

“They harm themselves, not other people, and the fact the costumes are based on violent films doesn’t make it ok, because they stigmatise vulnerable people as well. I would like to see them all removed and for the people who sell them to recognise the harm they do.”