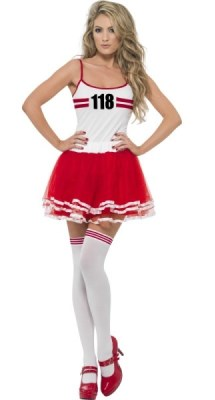 If you have ever taken part in a marathon running event or watched one on television, you have probably seen a number of runners who have opted to complete the race in a fun and playful fancy dress costume rather than traditional running gear – such as in the Race for Life in Southampton for example (which will take place this year on July 6th).

Why exactly do people like to run in fancy dress costumes for races? Isn’t running a race difficult enough without the extra weight an annoyance of a costume? Are these runners just attention seekers or is there a good reason why they are doing it?

Many people assume that the runners who are wearing ridiculous costumes are the slowest runners and they are only doing it for fun. However, this is not true for most costumed runners. They need to be fit athletes to run with the extra weight of the costume over 26 miles! Also, they usually wear the costumes not just for attention for themselves but to raise awareness of the charity they are supporting.

Most people who run in costume are looking for a different running challenge. Perhaps they have run a few marathons before and they are looking to push themselves in a new and interesting way. Also, other people who are running in costume are doing it because it is an effective way to generate attention and raise the profile for the charity that the marathon is supporting. Running in a costume can be a better experience as you will have a different interaction with the crowd than you would have if you were a regular runner.

Tips for Choosing Fancy Dress for a Race

When you are choosing a fancy dress costume for a race, what factors should you be considering? Here are some tips to keep in mind:

These are just a few tips to keep in mind when you are choosing a costume for your next charity race. Have fun!