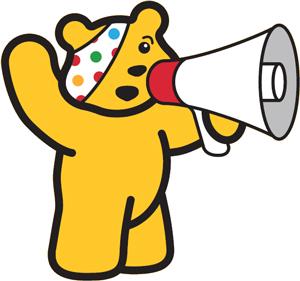 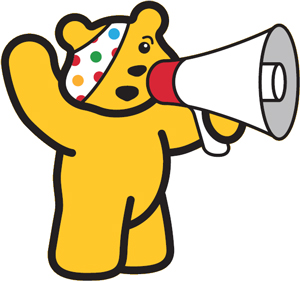 It Is Time...Done your capes, put your underwear on the outside of your trousers and show off your super hero style for this year’s Children In Need extravaganza!

Most people know BBC Children In Need by the telethon shown on BBC One each November. This year it will be broadcasted live from Albert Square, famously the set of hit British soap Eastenders. Sir Terry Wogan will be hosting as he has been since the first televised appeal in 1980 and will of course be joined by everyone’s favourite bear, Pudsey!

Pudsey has been the poster child for Children In Need since 1985 when first created by BBC graphic designer Joanna Ball. Before being re-designed a year later Pudsey was depicted with a sad expression and was also orange, rather than the sunshine yellow we know and love today.

Since hitting television in 1980, BBC’s Children in Need has raised over £600 million to help change the lives of our nation’s younger generations. In 1988 they even became a registered charity and took the highest total raised to that point, which has gone on to grow and grow each year, with last year’s total being a whopping £49,600,000!

The theme for this year’s appeal is SUPERHEROES! We all have our favourite comic book hero, but now it’s your turn to save the day! The lovely people at the BBC have even made it easy by giving you fun activities to get involved with.

If you’re a dab hand in the kitchen and think you can pull off the perfect cake, then why not show off your skills at a bake sale! The tried and true way of raising money and giving back to your supporters, it’s a win/win for everyone! There are even celebrity chef’s recipes to follow on the website so you can have a little healthy competition with your friends and colleagues.

For the athletes among us, why not set a new personal best? Whether you can run, swim or cycle, take sponsorship from your friends and family for pushing yourself to the limit and moving so fast people will thing you’re The Flash!

If you’re up for a different kind of challenge, you could do a sponsored silence or take the cinnamon challenge. If you’re feeling particularly competitive why not try and beat one of the silliest world records, like seeing how many pairs of pants you can put on in under a minute?!

Do you have a special talent? Is it impressive enough to draw a crowd? Raise money with a talent show at school or at work to flaunt your heroic skills and specialities for a good cause. Sing your heart out, do some magic tricks or dance the night away!

Last but not least, be a Fancy Dress Hero!

There are plenty of ways you can raise money and look awesome while doing so, like getting everyone at work or school to pay £1 to wear a silly costume for the day! Hold your own super fancy dress party or event and get everyone to pay a small admission fee on the door; you could even double up ideas and sell some yummy cakes inside! Here at Hollywood we have a huge range of superhero costumes for everyone, no matter what your size, style or budget. Be Superman and save the day or be Wonder Woman and wield your lasso of truth!  Whether you’re dressing up to go out and do good deeds or just to have fun while you’re getting sponsored, remember that you are all heroes!

If you want to get involved with any of the BBC Children In Need fundraising ideas all you need to do is check out the website. It’s full of ideas, tips and even downloadable posters so you can promote your event in style! Every penny counts towards the final total so band together and let’s keep the sponsorships soaring!