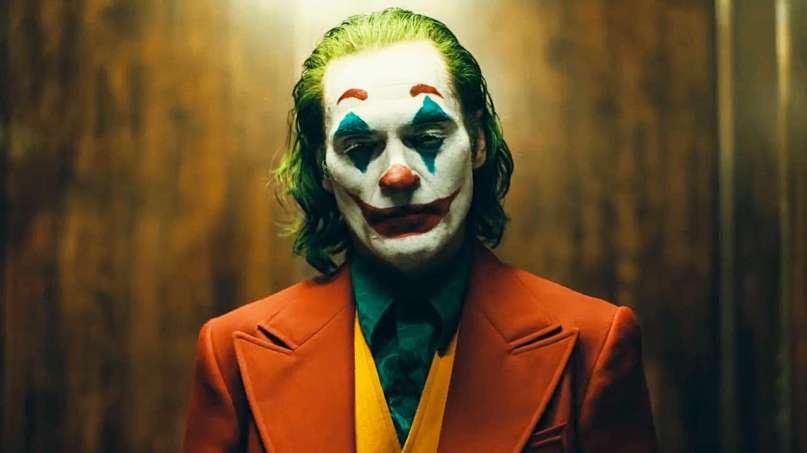 Are you a fan of DC's Joker? Then you are in luck! His very own movie is coming to the big screen on the 4th October (UK).

What is Joker about?

Joker centres around an origin of the iconic arch nemesis and is an original, standalone story not seen before on the big screen. Todd Phillips' exploration of Arthur Fleck (Joaquin Phoenix), a man disregarded by society, is not only a gritty character study, but also a broader cautionary tale. 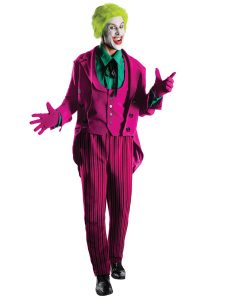 What will you have hiding up your sleeve as you turn into the Clown Prince of Crime, the original Batman series' Impractical Joker? For an authentic look, be sure to apply plenty of make-up (not included).

Simply AMAZING! This fantastic Grand Heritage Joker costume is perfect for any true Batman fan out there! This brilliant look was first introduced in the 1960's! Now you can dress as Batman's ultimate arch enemy- the crazy Joker! This incredible costume includes a pink jacket with shirt cuffs, vest, dickie with tie, matching pin strip trousers and gloves to finish off the look! This costume is of course of deluxe and stage quality! 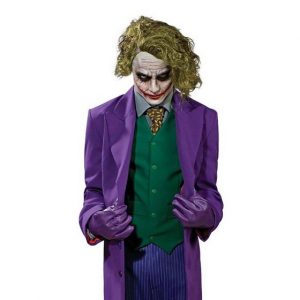 History tells us the late Heath Ledger locked himself away for a month to prepare for his role in The Dark Knight. This version of The Joker is for like-minded perfectionists, right down to the included threatening black eye make up for a sinister take on DC Comics' arch villain. 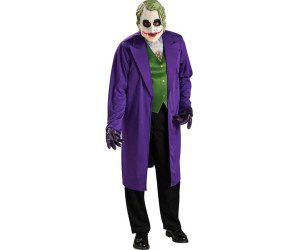 This costume contains everything you need to become the Dark Knight’s greatest nemesis, and includes a mask, along with the unmistakable purple jacket, a printed shirt, a tie and a vest. Joker fancy dress costumes are just as multitudinous as his incarnations in film, cartoons and comic books. But if you’re after the authentic Dark Knight joker, then accept no substitute for this amazing costume. With the help of this amazing costume, you’ll be able to steal the show at every Halloween party you attend – after all, Halloween deserves a better class of costume. 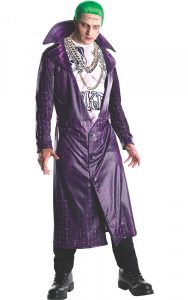 With his flamboyant coat open enough to reveal his unusual body art, few will dare to look The Joker in the eye. This latest, Suicide Squad incarnation of Batman’s arch-nemesis has his own dark agenda. This fantastic outfit comes complete with a long purple printed Jacket with attached tattooed printed shirt. It's a must-have for any DC fan! 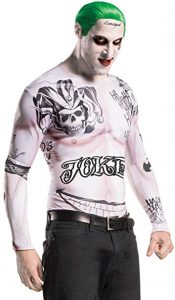 Join the team of some very bad people that can do some good: the Suicide Squad! With one eye on Harley Quinn and another on your deadly mission, here’s your chance to play one of Gotham’s darkest characters! Comes complete with Tattooed Printed Top, Green Wig and Make Up to finish off the look. 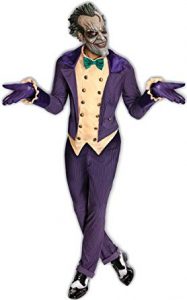 Throughout its history, the Batman series has enjoyed a succession of videogame interpretations. Like the Batman films, these vary tremendously in quality – some are great, others are dreadful – but there are few better than the recent Arkham series of games, where players are invited to play as Batman, running, swooping and zip-lining around, solving crimes, beating up bad guys and thwarting a varied roster of villains.

Nearly every major Batman villain is included in the second of the series, Arkham City, from Penguin to Two-Face to Poison Ivy to Bane to the Riddler to Ra’s al-Gul. But few of them are even close to matching the Joker. The Joker steals every scene he’s present in, and still manages to do so with a smile, even after his face has sustained horrific burns. That’s commitment to the craft! 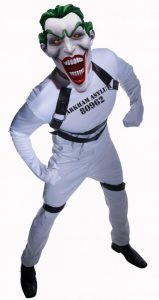 The Joker, it must be said, is one of the greatest villains in all fiction. He’s the clown prince of crime, living embodiment of chaos, or just a man who wants to watch the world burn! Depending on which interpretation of the character you favour? And there have been many different interpretations over the years – from Mark Hamill’s chuckling maniac to the late Health Ledger’s unhinged genius.

Joker spends a lot of his time interred within Arkham Asylum (leaving Batman free to pursue other villains posing a threat to Gotham.) This costume allow you to be the Joker as he is when he’s in prison – complete with a white straightjacket jumpsuit bearing Joker’s unique prisoner number across the front with black straps, and a latex mask of the Joker’s grinning, maniacal face. 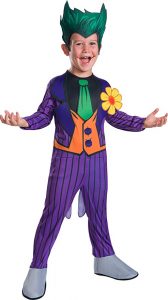 This brilliant Kids, Joker Fancy Dress Outfit is ideal for any little one looking to dress as Gotham's baddest baddie... The Joker of course!

This Boy's The Joker Costume comes complete with a Purple, Pinstriped Jumpsuit with Suit and Waistcoat Print. Also included is attached Shoe Covers, Bright Yellow Flower and Green Headpiece to finish off the look. This fabulous attire can be used for dressing as the Lego Joker! Simply add yellow facepaint to your order.

It's the Clown Prince of Crime himself! The Joker's bright purple suit and giant flower pinned to his lapel are quite unmistakable. This jumpsuit with its attached shoe covers also comes with a headpiece, a mop of green hair. It will have audiences laughing with you or running scared!

This city deserves a better class of criminal. And I'm gonna give it to them. Spook Batman and all your friends with this, the scariest version ever of DC Comics' infamous Joker! Will you have the last laugh or will Batman spoil the punch line? This fantastic outfit comes complete with a purple jacket with attached shirt, tie and green vest. Also included is pin-striped trousers and deluxe mask to finish off the look. Perfect for any little DC lover! 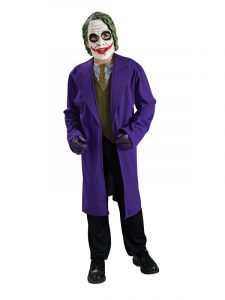 "Why so serious?" Dress up as Heath Ledger's Joker in The Dark Knight in this authentic costume. Only Batman can wipe that twisted smile off your face! Comes with Jacket with printed Shirt and Mask to finish off the look.