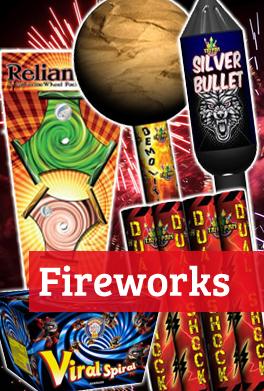 Fireworks can be enjoyed worldwide by kids of all ages! Here at Hollywood you can even enjoy them all year round, but what better time to have a firework party than for New Year? Besides, who needs an excuse to get together with family and friends to set off fireworks?

When it comes to buying your fireworks, you might have more choice than you think. Like most people you’ve probably purchased fireworks while doing your food shopping in one of the large supermarkets and that’s fine, you’ll get a little selection box for about a tenner and leave feeling like you’ve got a bargain. But even people with a tight budget are allowed to be discerning when it comes to fireworks!

Why Come To Us For Fireworks?

When you come to Hollywood for fireworks, not only do you have a huge selection of top brand fireworks to choose from, you’ll also get advice from people that know what they do. We’ve all seen fireworks, but how many people know what each type does, or even the names of the different types that are available? Knowledge is the key when putting together a good display so spending a little time on our website could be the most fun educational experience you’ve ever had! If you’re having a firework party but you’re still not sure what you'd like then go for a little bit of everything with a selection box. If you want to pick up something quickly and easily then selection boxes take the headache out of choosing individual fireworks, making them perfect for first timers and experts alike. You will get what you pay for as far as these go so the more you spend the more you get in the box and the bigger those fireworks will be, but that’s not to say that you can’t get a decent little display for less than £10. If you’re looking to impress your guests then be sure to go for one of the bigger boxes such as Imperial, which is a fantastic collection of 50 fireworks with a selection of barrages, wheels, roman candles and even some rockets too!

Rockets! Yes everyone loves rockets, they’re explosives on sticks that fly off into the air and go BOOM and so they are naturally the first choice of every macho man-child. They are fantastic finale fireworks and can really pack a punch. As with all fireworks, the range of rockets available is spectacular and size certainly does matter in this case! The bigger the rocket, the more firepower will be packed in which will give you the more impressive end result so if you want it to be memorable, go big or go home... or inside.

Of course you can’t have a firework party without rockets, but the main bulk of your party will be made up of barrages (you might know them as cakes) these are single light boxes that give you a display. Barrages come in all shapes and sizes and can range in price from a few pounds up to a good few hundred. You can get such a variety from these fireworks that you could create an entire display made up of just barrages if you wanted to. Why not try out Shanghai Nights, an awe inspiring selection of colourful shots and crackling stars beautifully put together in a fan display.

The most important thing to remember with roman candle fireworks is that they must go in the ground just as other fireworks do and that they are not to be held when setting off. Misconception about these fireworks has caused them to be banned in parts of the world, such as many of the bigger American states. Roman candles are tubular fireworks that set off in layers giving you a succession of shots one after the other as the firework burns down. They make very good fill in fireworks for between larger barrages, but are not a standalone display.

These cone shaped fireworks create a column of sparks resembling a fountain, hence the name. They are often comprised of only one type of shot packed into the casing but usually start off slowly, building up to an impressive roar of glitter giving the illusion that it has variety. Multi effect fountains have the advantage of giving you a variety of different effects as they are separated into different tubes resembling a barrage. However with multi effect fountains each of the effects is shorter and doesn’t get as high off the ground as the dedicated single effect fountains.

Mine fireworks are usually just a single casing filled with a selection of different effect shots which all go off in one go. This is particularly impressive for bigger displays when done all in a row as a finale with big rockets going off in the background like you see on TV for New Year’s. Mines are also available with fountain starts so if you’re looking for some build up to your final explosion, these are for you.

Beginners tend to shy away from firework wheels as they require mounting to a surface, but oh boy, would you be missing out! Bigger Catherine wheels are spectacular with rocket like thrusters mounted onto card or plastic these fireworks can spin great speeds giving the most beautiful effects. Most of the larger wheels will change effect as they spin going from colour to colour or releasing a screeching sound to keep you on your toes. Pin wheels are the smaller variety of firework wheel and tend to have one coiled tube of powder around the edge to propel it. While they are smaller and often a little slower you are still able to get some really impressive effects with these little guys.

Now as fun as fireworks are, they are explosives so health and safety measures do have to be taken when setting them off. Each firework will have instructions on the back on how to ignite it and the distance you need to be from the firework once set off so be sure to buy the correct fireworks for your venue size! The distance the audience needs to be from the firework ignition area is dictated by the size and style of the firework. For garden fireworks this is often a distance of 5-8 metres as a minimum, but for larger display fireworks it can be a minimum of 25 metres. Always make sure that your fireworks are memorable for the right reasons!