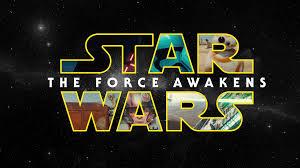 It’s the film we’ve all been waiting 10 years for and it’s finally so close that we can almost touch it! I am, of course, talking

about Star Wars “The Force Awakens”. There are some very high hopes for the new edition to an already huge saga and Disney has a lot to prove! Will it be the movie of the decade?

Star Wars is a franchise known all around the world. Since the release of the first movie in 1977, the empire (real and fictional) has grown more than anyone could have imagined. Whether you’ve seen the films or not, you know the characters because they are everywhere! Darth Vader and Luke Skywalker have become household names and you can’t go to any convention without seeing at least one group of Stormtroopers. Star Wars has such a dedicated fan base too, with people doing good deeds in the name of the force, like The SO16 troopers who often take part in charity events dressed head to toe in authentic Star Wars costumes!

As most of you know, Disney bought the rights to Lucasfilm and Star Wars back in 2012, which filled many dedicated fans with utter dread about what was to become of their precious franchise. TV series “Star Wars: Rebels” was our first glimpse into the future of the Star Wars brand and while it was engaging for a fresh young audience, it had die-hard fans hearts sinking.... But then, as if by magic, the trailer for The Force Awakens was unleashed upon the world! It was epic, it was exciting, it put the smiles back on everyone’s faces! There have been re-designs and tweaks made to some aesthetics, but you can see that it is keeping true to the atmosphere of Star Wars. It’s fantastic to see that the 30 year timeline jump has been worked to include cameos from some of the most iconic characters of the original movies, such as Harrison Ford, Mark Hamill and Carrie Fisher all playing their original characters. Quite frankly, we can’t wait! Get yourself down to the nearest cinema on Thursday 17th December to see what all the fuss is about. With a December release, The Force Awakens will be in everyone’s Christmas stockings this year and we’ve seen a dramatic rise in Star Wars themed festive jumpers too. To add to the hype, the latest Star Wars video game, Star Wars "Battlefront", has been released this month too and it has already been a huge success among fans new and old alike! If you’re thinking of getting into the festive force spirit, then don’t forget to pay your local Hollywood a visit! We stock a wide range of Star Wars themed costumes and masks for all ages, we even have Star Wars themed balloons! If you’re looking for something particularly special we even sell the collectors edition of the deluxe Darth Vader mask made in the original Lucasfilm molds! Now wouldn’t that be a truly awesome Christmas present for a dedicated Star Wars fan?!