Disney Characters - Most Famous Female's – Who is Your Favourite? 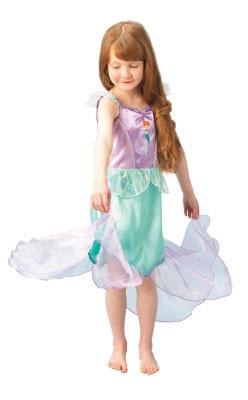 We all have our own favourites when it comes to Disney characters and Disney has created some truly great female characters. Whether you dream of being whisked away to a life of luxury by your very own Prince Charming, or would prefer to be brave and fearless like Princess Merida, we've compiled a list of Disney's most famous female characters; who is your favourite?

Better known as the Little Mermaid, Ariel shot onto our screens back in 1989 and was an instant hit with children and adults of all ages. Her flame red hair, huge eyes and gorgeous singing voice probably had something to do with her popularity, but she also had a fiery personality. In the film, Ariel leaves home to be with the man she loves; unfortunately for her, she makes a deal with Ursula, the Sea Witch, to give up her fins for legs. Most adults already know the story of the Little Mermaid, but this Disney classic is fun for the whole family and Princess Ariel is a popular choice for anyone dressing up as a Disney princess.

“Rapunzel, Rapunzel, let down your hair!”

The recent release of Disney's “Tangled” in 2010 shot Rapunzel to fame with children who may not have been aware of the popular fairy story. In the film, Rapunzel is kidnapped from her parents by wicked Mother Gothel for the restorative, youth-giving powers of her long, blonde hair, is kept locked in a tower, hidden from the outside world. Every day she lets down her long hair when Mother Gothel returns from her travels, in order for her to climb back up it to the tower. On her eighteenth birthday, she leaves the tower and the adventure begins. To give more away about the story would spoil things – it's a classic Disney animation with plenty of laughter, tears and musical numbers and it's ensured that Rapunzel is the perfect fancy dress outfit for little girls of all ages.

Beauty and the Beast was released by Disney in 1991, based on the traditional French fairy-tale of the same name by Jeanne-Marie Le Prince de Beaumont. It tells the story of a young prince who is transformed into a beast and Belle, the young woman he falls in love with. Did you know that Beauty and the Beast was the first animated Disney film to be turned into a Broadway musical? Whilst there were a host of other memorable characters in the movie (who could forget Lumiere, the very French talking candelabra, or Mrs Potts, voiced by Angela Lansbury), Belle is the one we all love. Her beautiful dark hair, obvious intelligence (in the film she has a love of books) and caring nature make her one of Disney's sweetest female characters; but she's feisty too, as we see later in her dealings with one of her admirers, Gaston!

Many little girls grew up dreaming of being Alice in Wonderland and Lewis Carroll's much-loved character is still a huge influence today. Whether you read the books, watched the Disney film (made in 1951) or saw the new Tim Burton adaptation in 2010, it's hard to deny the appeal of Alice and the magic of Wonderland. Her iconic blue and white dress, long, straight blonde hair and white tights have become a popular fancy dress costume with children (and adults) of all ages. In the Disney film, Alice chases a mysterious white rabbit down a hole and falls into Wonderland, a magical place where nothing is as it seems. Alice in Wonderland is filled with a whole host of other magical characters, including the Cheshire cat, the Mad Hatter and the truly evil Queen of Hearts – it's a classic Disney film that is a must-see for all ages.

We've focused so much on the good, beautiful Disney characters; how about a villain instead? Cruella de Ville is the Disney villain that everybody loves to hate. In the original Disney animation, 101 Dalmatians (1961), she's a snarling, terrifying woman in a Dalmatian skin coat, with red lipstick, a gaunt face and a crop of black and white hair. The modern, live-action version (released in 1996) sees a perfectly-cast Glenn Close take on the iconic role of Cruella! The premise for the film is simple; Cruella kidnaps Dalmatian puppies for their fur, to make beautiful coats – but she's not going to get away with it; or is she? The glamorous, over-the-top styling and personality of Cruella makes her the perfect choice for anyone dressing up for Halloween or other fancy dress occasions; she's a lot of fun, try not to come in a real Dalmatian fur coat though!

One of the latest and probably most popular (right now anyway) Disney characters with young children is Elsa, a princess turned queen from the movie Frozen. She is used as a villain in many ways at the beginning; everyone is scared of her and her powers at the start. She became isolated as a child due to harming her sister Princess Anna by accident due to problems controlling her powers, but after a few trials and tribulations the sisters become inseparable again. If you have young children you will almost definitely have seen this by now (many times!) as your daughter sings ‘let it go’ over and over in her highest pitch voice. This is the perfect outfit for a party or special occasion for your little girl; she will feel like a real princess!